Venice Profile: Who Is Gerry Fialka? 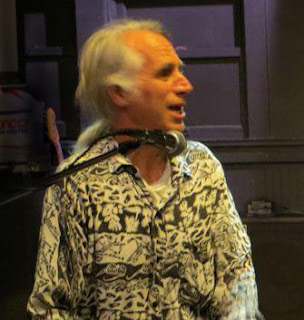 “Uh oh, I’ll never reveal that. I don’t even know”, he joked… “Lo-fi hi-jinks” “I host a reading club but I was not ever a great reader.”

He’s been a mainstay of the Venice scene for over 30 years. He’s a filmmaker, a voracious event organizer who regularly hosts five multimedia events each month along with numerous special events he creates with filmmakers, authors, musicians and artists of all stripes. He has worked for the late Frank Zappa and is a musician in his own right playing guitar with the avant garde group Black Shoe Polish. He is a friend to the homeless and has more sides than a kaleidoscope. Throughout his various interests and passions runs the theme of community. Fialka is also half of a Venice ‘IT’ couple completed by his wife, singer/siren Suzy Williams. AKFF recently sat down with the perpetually busy Fialka for a face to face.

You’re originally from Flint, MI. How did you find yourself in Venice, CA?
“I’d studied modern art and film studies at the University of Michigan. I was on the screening committee of the Ann Arbor Film Festival. Two friends moved to Venice and told me it was a cool place. So I moved to LA because I had experience in film distribution and knew film festival aesthetics and thought I could work in that world. I’ve been here in the same place for 33 years. I think Venice is the best place to live in the world. I never thought of ever moving out. I love it.”

There’s been a lot of changes to Venice, most recently on Abbot Kinney Blvd.
“They’ve been trying to gentrify Venice for 30, 40, 50 years but there’s still no McDonalds on the Boardwalk. So Abbot Kinney is an expensive street but you still got Abbots Habit the coffeehouse and pizza parlor where the locals can hang out. So that’s cool.”

What does Venice represent to you?
“The biggest thing is community. You’ve got a millionaire movie director next to a homeless junkie and you can’t tell the difference. You go to Marina del Rey or Santa Monica and you can tell, there is a consumer, there is a homeless. So I like the inclusivity of it and I like the fact that we get one million people walk through our neighborhood every month. So you get cultures from all over the world checking out your culture, so there’s a lot of interchange. If you study the history of Abbot Kinney he’s a pretty heavy dude.”  The band Venice is from the same family as The Lennon Sisters, added AKFF. “There you go. It’s got a lot of great history and a great attraction to people of all different types. In Venice we don’t repress your craziness. It’s a beautiful thing. People are more tolerant and accepting of people of all types.”

Gerry’s PXL THIS annual ‘film’ festival features movies made with the PXL 2000 kids’ toy camera. It premieres in Santa Monica on the first Monday in December and also shows in Echo Park, San Francisco, Dallas and other cities as well. “It’s 22 years old, it’s really fun. No budget. It’s easy. I’ve met people from all over the world. It’s ridiculous how much mileage I’ve gotten out of what’s been called ‘lo-fi hi-jinks’.”

PART 2 OF THE EPIC INTERVIEW WITH GERRY FIALKA  >

For information on Gerry Fialka events visit laughtears.com
Stay tuned for Part 2 of the Gerry Fialka experience coming soon on the AKFF Blog!