I have always loved Abbot Kinney First Friday’s and was pleasantly surprised to learn when I moved to Las Vegas, NV, they also hold one.

Eager to compare their event to Venice and experience it for myself, I joined a couple friends for dinner at a local Mexican restaurant before making the foray into the unknown. And what an unknown it was. 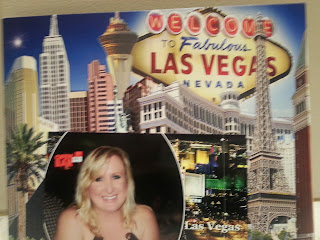 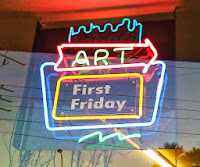 Some art galleries host First Thursday Openings to allow those who only want to see art to attend that night instead because it’s not really the focus any more of First Fridays. A few gallery highlights include: Brett Wesley, the Arts Factory, Cob4lt Blu3 Gallery, City of the World, Trifecta Gallery, Southwestern Scenery and Southern Nevada Center of the Arts. 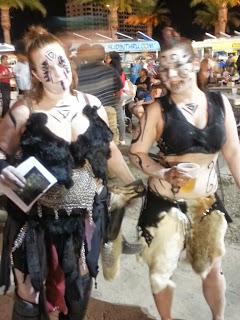 The crowds are vastly different than the Venice, CA scene as well making for interesting people-watching as I saw  many lesbians holding hands, scantily clad young girls wearing nothing more than bras , medieval dressed warriors promoting their upcoming events, zombies promoting the upcoming Halloween haunted houses,  many young teenagers roaming around in packs and primarily, what seemed to be locals during the time we walked around.

The entire event runs from 7pm – 11pm, although due to the local area bars being open later, the party continues until the wee hours of the night and is free and open to the public. We were there until about 10pm when the smell of pot became so thick it was like walking through a cloud.

Although it is touted as a family friendly event and probably is, early on in the evening in certain places, I personally wouldn’t consider bringing small children down because Vegas is still Sin City after all and locals really don’t care who they offend or shock. 🙂 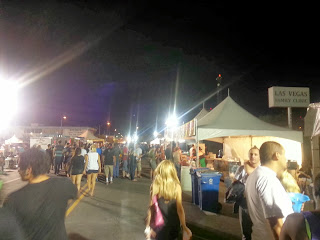 Some aspects will always be more successful than others and at a certain point it will be necessary to scale back the parts that aren’t working to make room for those that are. However, I do know the organizer’s are constantly tweaking and working on the formula and believe they will achieve their goals.

The earlier hours, when we visited back in September, were filled with what seemed like hundreds of local teenagers eager to party. This has been an ongoing concern of organizers, City Officials and non-profit leaders who work with teenagers. As a result, there are coordinated efforts to begin curbing this activity and offer alternatives through the various charities focused on youth.

You can read more here: The Downtown Kids Are All Right 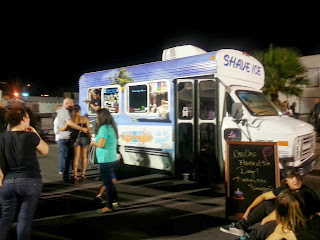 To be honest, the vibe and feel of this festival is more in line with what Hollywood used to feel like before it was cleaned up. I think the Vegas First Friday Organizers are on the right track, they’re making progress and ultimately it will be an event that will draw visitors to Vegas solely to attend this event as evident by the rapid increase of attendees from 8,000 when it first started two years ago, to their present 25,000 person audience.

However, compared to Abbot Kinney First Friday, I don’t see it drawing a similar higher end demographic any time soon. That said, if you don’t compare these two events, and simply take it at face value as a cool addition to the Downtown Vegas scene, I do think it has it’s own particular charm and place in the Downtown landscape. 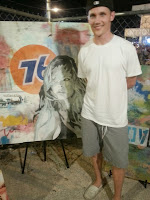 As Venice has become more gentrified, it’s easy to see Downtown Vegas moving quickly in that direction too. Artists are always the first to move into an area and create a special vibe and feel that ultimately everyone wants in on which can be a good thing, or bad, depending on which side of that gentrified fence you sit on. 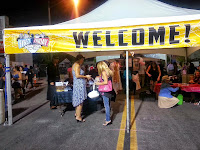 If you’re planning a trip to Vegas and want more information on the Vegas First Friday, please click here. The next one is scheduled for November 1, 2013 from 7pm – 11pm. Maybe I’ll see you there…