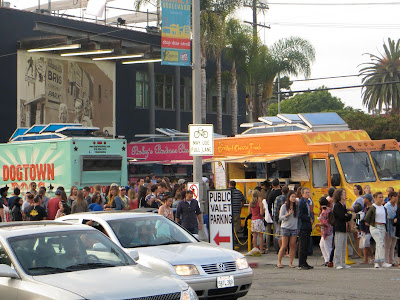 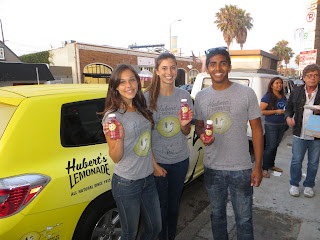 Hubert’s Lemonade was out on the boulevard, handing out samples – we loved the mango and strawberry! Did catch a glimpse their bright yellow car? If you were there, you couldn’t help but notice… Washio teamed up with them, a dry cleaning service that comes to you, and gave away canvas bags. 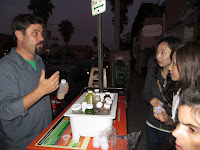 Walking down the  famous blvd. we  sampled some amazing fresh pressed juices from Kreation Organic– thanks  to Manager, Ralph Doyle for the awesome samples- we were buzzing after that! Walking along the boulevard, our new Sales and Marketing Director, Damon Howard chatted with Filmmaker Aron Ranen (see photo- Damon on Left, Aron on right.)  Sophia Vergara was seen on Abbot Kinney  while a movie was being filmed over at The Brig. 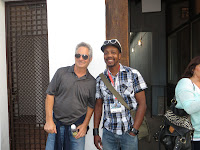 We also ran into some pink piggies promoting the opening of Pork Belly’s and talked to their friendly Chef Paul. We’ll be checking both places out soon! Watch for our forthcoming restaurant reviews!   We also sampled  a chocolate marshmello cupcake from Sweet Arleen’s food truck – and it was sweet and yummy! So much sampling, too little time! 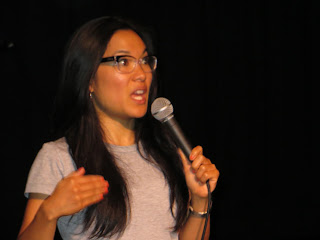 The AKFF Blog Team also sampled some  summer brew from Angel City Brewery, while we were at the comedy Preparty Show at Electric Lodge, which had a supa funny, laugh out loud show- with a great range of comics from hilarious headliner Ali Wong, to the outrageous Sean Patton and deadpan humorist Ben Gleib who kept us rolling in the aisles. Thanks to comedian Assad Motavasseli for the tix!
There was also the Paparazzi Comedy show at Get Waxed, featuring a number of talented comedians including Janet Rousseau and Kristi McHugh a Venice local. This show will happen  every month at First Fridays- so be sure to check  it out!
The AKFF Blog ran contests on our Facebook and Twitter pages – we’ll be doing that every month, so make sure to get in on the fun  for the chance to win a prize.
First Friday Contest Winners:
Facebook Contest:
2 tickets  Pre-party Comedy Show– Jim Darechuk
Twitter Contest:
Bottle of Wine from Joe’s Restaurant– Deb Eckerling
Winebar Ticket to Paparazzi Comedy– Rebecca Michelson
Thanks to all our sponsors who donated prizes!
There were new places open like boutique Scotch & Soda and Salt Air restaurant plus  a sale going on at Heavenly Couture and so much more! 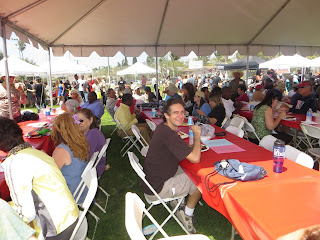 On Saturday, the Venice Community BBQ sponsored by the Venice Neighborhood Council was so much fun with an amazing amount of food, with grilled chicken and pulled pork  from Firestation 63 in Venice and side dishes and desserts from the community. There was live music with headliner, The Bonedaddys working the crowd to shake it! More photos coming soon on our Facebook page for events we attended.
Events MASHup! Aug 7 – 11
Wed– Miss Jessica at Danny’s, 7:30-10:30
Thurs– Santa Monica Pier Concert 7-9:30
Fri- Bass at the newly revamped RG Club
NetteRadio’s Affect The Effect Fundraiser at Talking Stick 7-10:30pm, $5 Donation, live music  with Patsy Moore and others
Sat- Disco Funk Night at Witzend, 70 & 80’s covers with the Witzenders 7:00pm – 12:30am
Got an event you want the AKFF to post? Email us &  your event will be considered. Send text and an optional photo.