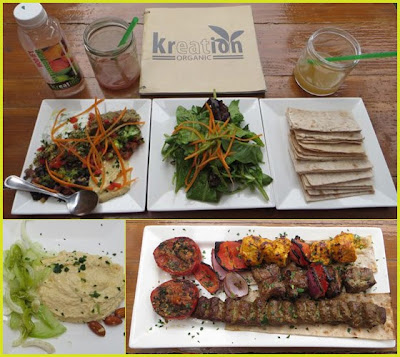 The AKFF Blog Team first got a taste when the  restaurant (opened recently in May), was offering samples served by Manager Ralph Doyle  at the monthly August 2013 First Fridays on Abbot Kinney event. Most of the juices were fruit based, with names such as “Modify” which has pear, strawberry and apple. Simply put, the juices are delicious, and they  are more nutritious and healthier than traditional juicing methods. We really were buzzing after trying an assortment of flavors! The fruit juices were more appealing than the veggie ones and one of the veggie juices was  on the spicy hot side.
The AKFF Blog Team decided to check out the lovely cafe for both eats and drinks  in the late afternoon a few weeks later. The mostly outdoor  restaurant has a cafe casual atmosphere that’s a great people watching spot on Abbot Kinney – it’s one of the few where you can dine outdoors with a view  to see all the action on AKB. We met up with Ralph again, who told us about the Persian inspired menu of healthy food in an eco-friendly environment that serves breakfast, lunch and dinner in addition to the cold pressed juices and coffee plus smoothies – and yes, you can get them to go. 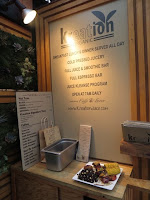 Let’s move on to the food; we started with the Homemade Hummus from the cold tapas menu which was served with  fennel, celery and almonds and garnished with organic walnut oil plus a plate of  lavash bread. It was a great way to start off a meal. Adding a squeeze of lemon juice would be the only addition this writer would recommend, of course, that’s a matter of personal taste.
Next we tried the Soltani plate, one of the most popular dishes at Kreation Organic,which is meant for two people to split and is an ample dish- actually dishes including a plate with  three types of kebabs (chicken, beef tenderloin and ground beef) a house salad and a tapas plate with tabouli, babganoush and hummus.  We both liked the  chicken kebabs the best which were truly delicious, although the middle was a bit dry. The ground beef was surprisingly tasty for someone that’s not big on ground beef in general, and the beef tenderloin was very good too. The tapas place was good too (again, add a squeeze of lemon juice to it all)  and very filling. 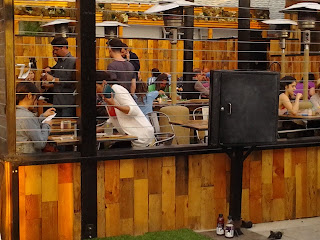 Other items of interest on the menu that are popular are the Persian inspired wraps and salads. Both meat eaters and vegetarians alike are sure to like this place. This is the only place on the boulevard with traditional Persian food and a welcome addition!
This was a very positive dining experience with the combination of  casual atmosphere, delicious, healthy Persian food with good service with an ideal location and it’s easy on the pocketbook too! Whether you’re here for a coffee, smoothie or full meal, it’s worth checking out.  PS It’s open late on First Fridays!