Abbot Kinney First Fridays was simply FABulous in FABuary this year! Shopping from brands like Satine, Lucky Brand, Gant, AV Nation, Wylie Wilson and many more. Delish eats from food trucks such  as  Homeboy Industries, The Chili Philosopher and Frach’s.  Drinks from the Other Room to quench your thirst. It’s all on Abbot Kinney Blvd in Venice CA!

Feel free to share our photo album on our social media links below. Cu at  the next First Fridays on March 6, 2015!

PS – If you want your shop, restaurant, food truck or any business to be promoted in our March edition of 1st Fridays, contact the AKFF Editor! If you like the food trucks you will be diggin’ on this foodie fest this Sunday, September 14, 2014, from 3-7:30pm. Taste of Venice, a restaurant tour of choice spots in Venice gives you the opportunity to sample amazing food and give back to the community!

Here’s the scoop:
Taste of Venice consists of three courses: The Opening Celebration, the Tasting Tour, and the Post Reception.  The Opening Celebration will feature food, cocktails, a silent auction, and ample entertainment at the Electric Lodge in Venice.  The Tasting Tour will be an opportunity to taste exclusive samples from our favorite Abbot Kinney Boulevard restaurants, led by a culinary insider like Adam Gertler from the Food Channel.  The Post Reception will include coffee, treats, and drinks for our guests. All funds raised from ticket sales support P.S. ARTS’ arts education programs.

Hurry and get your tickets in advance so you can choose your tour leader (aka Tastemaker) like Adam Gertler, or other fave foodie, etc. Get Tickets Now > 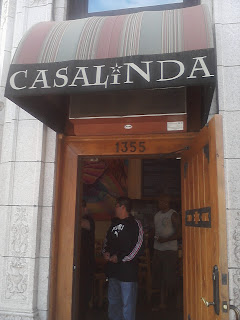 Delicious Mexican food that’s super affordable – on Abbot Kinney! For real – it’s been around for about 2 years now and  CasaLinda Mexican Grill rocks! It’s owned by the same owners of  Hal’s Bar and Grill, one of my fave places on the boulevard, so you know it’s got to be good!

So you’re hungry when it’s First Friday  and you want something fast but not fast food and a place where you can sit down instead of standing out on the sidewalk? Walk in the door at the corner of Abbot Kinney Bl. and California (at the light), step up to the counter and you’ll be greeted by a friendly staff, ready to take your order.

I simply love the Chicken Amarillo Tamales – only $2.50 each – yes, and wrapped in a banana leaf.  A tamale has got to be good on the inside and out and  many places the outside tastes like cardboard – not here. Tender and tasty with good quality chicken on the inside and a nice spicy red sauce. Just add salsa and pickled carrots from the salsa bar and it’s a good meal. You may want to add some chips too.

The salad is good for two people to split. My boyfriend and I  did just that – we topped it off with chicken (or get it with shrimp or beef). We both found it very tasty liked the dressing too, although it was skimpy on the avocado. 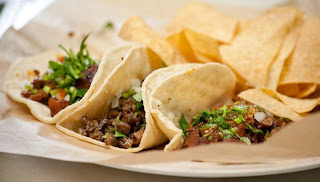 A few of my male friends that I brought here loved the burrito with chicken, a meal in itself; they range from $5.75 – 11.25 depending on what you order. Tacos are yummy too! The atmosphere is super casual with two floors  with seating, including a counter area and a few tables outdoor. The Abbot Kinney 1st Fridays blog recommends you check out CasaLinda next time you’re out on the famous boulevard!  How was your experience at CasaLinda? Just click on the Comments link below and let us know and we might post it. (Tip- use your Google login; all comments are moderated on this blog.)