After eating all the goodies (and in some cases pigging out) over the holidays, most of us have put on a few pounds and now is the time to get back into shape! Turning Point Pilates in Venice (near Abbot Kinney Bl) wants to help you get a rocking bod and is offering a New Year Special just for AKFF peeps!

How do you do that? You’ve got 2 options:

Did you know that Turning Point Pilates was voted “Best of the Westside” in the Pilates category, two years in a row by Argonaut Newspaper readers. Opportunity is knocking, so don’t delay!

Turning Point Pilates is a classical pilates studio around the corner from Abbot Kinney – just head east on Venice Blvd and look for their sign in the same complex as the public storage.
*Offer is for New Clients Only. It’s the last First Friday of 2014 and there are special Holiday events in both Venice and Santa Monica! Let’s get to 1st Friday First:
Friday, December 5, 5-9pm Abbot Kinney Boulevard
There will be holiday carolers going up and down Abbot Kinney Bl, shops open late with holiday specials and restaurant happy hours too! Food trucks will be there as usual so eat, drink and be merry! Remember to throw your trash away too:)
Find out which Food trucks will be at 1st Fridays >
Food Trucks get info hereon 1st Fridays > Check out Doordash at 1st Fridays, giving away freebies at Heavenly Couture on Abbot Kinney.
Hungry and want to stay in? A cool new food delivery app! Doordash caters to  – Venice, Santa Monica, Marina del Rey, Brentwood, Pacific Palisades, Culver City, and Westwood. With restaurants on their roster like Tender Greens, Lyfe Kitchen, Sugarfish, Baby Blues, and Cafe Gratitude, to name a few, DoorDash has a selection that everyone can be excited about – whether you order on your way home from work, make it a night in with DoorDash and a movie, or are preparing for Football Sunday. Doordash is an on-demand delivery service that delivers from the best local restaurants within 45 minutes.
Get the Doordash App >
sponsored Get Your Holiday Gift Certificates & Give the Gift of a Hot Bod!

Need a gift idea this holiday season? Give a gift of fitness, like Pilates at award winning Pilates studio right here in Venice, Turning Point Pilates, conveniently located on 612a Venice Bl near Abbot Kinney.  Call 310-217-7630

Get the gift certificates for Pilates classes online >
sponsored Venice Sign Lighting
Friday, December 5, 6:15pm Pacific at Windward Sign Lighting 8pm
For the 3rd year in a row, the VENICE sign will be the star of this show! Watch the sign get lit up in festive Christmas lights by a secret  international celeb singer and Councilman Mike Bonin, enjoy live music from the Venice Symphony Orchestra and other local music acts at the VENICE Sign at Windward Avenue & Pacific Avenue.  Get drink and food specials at bars and restaurants on Windward Av. with a wristband. There are 2 ways to get a wristband: Restaurant Opening on 1st Friday!
Friday, December 5, 5-9:00 pm
While you’re at it, make sure to check out the grand opening of Status Kuo  restaurant in Mar Vista, just a hop, skip and a jump from Venice! The AKFF Blog Team checked it out for you at an exclusive tasting and really dig the chicken dishes, sandwiches (the barbecue with jack straw is awesome) and super fresh salads; the pork is really tender and succulent too. Good food, easy on the wallet! 3809 Grandview Bl 90066 See AKFF Facebook  pics >

It’s May 1 already! Start your month out with some fun events in Venice and Santa Monica. The AK Blog just added more 1st Fridays events plus the Home & Garden Tour below! 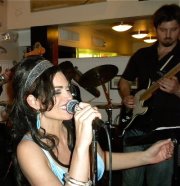 Wednesday: Miss Jessica and The Sugar Shack Attack at Danny’s 7:30 – 10:30pm
Join in on the fun at Danny’s where the locals hang to check out Miss Jessica who sings and shakes with Motown style funk! Happy Hour ends at 7, so get there early for the food and drink specials. 23 Windward Ave., Venice, CA 90291

Thursday: Acoustic Showcase at Santinos in Venice 9:30pm – 12:30am
Listen to live music and try some of the wonderful Argentinian cuisine!

Friday: 1st Fridays on Abbot Kinney Blvd. 6 – 10pm This free monthly event has been going strong for 4 years now! Enjoy the unique shopping & dining experience on Abbot Kinney Blvd. in Venice  90291! Check out Very Venice Gallery for their eclectic mix of local artists, including Amelia Drake’s new *Springtime Magjiks* collection in time for Mother’s Day and meet her in person. 1629 Abbot Kinney Blvd. Venice. Also check out Zingara (great for gifts too,)
585 Boardriders, the new shop around the corner at 585 Venice, Altered Spaces Gallery at the opposite end of the street with gifts and art 1221 Abbot Kinney Blvd.,
M Herrington is the new gallery in the front room at the  same address and Venice Vintage Paradise across the street for fantastic vintage finds and fun at 1144 Abbot Kinney Blvd.
Jazz at Joe’s Restaurant on the patio is another place to go- it’s west of the light at Wesminster. If you want a table you need to order dinner, fyi. Live jazz from 7 – 11pmwith The Dexter Story Trio Doing a Tribute to Miles Davis. 1023 Abbot Kinney Blvd. 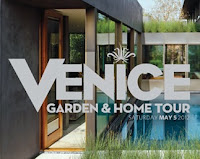 Saturday: Venice Garden and Home Tour 10am – 5pm: The Venice Garden & Home Tour is an annual fundraising event, benefiting the children of the Neighborhood Youth Association’s (NYA) Las Doradas Children’s Center in Venice, CA. This self-guided walking tour showcases the unique homes and gardens of the creative Venice Beach community, with original homeowner style as well as the designs of renowned architects and landscapers and has served thousands of “at risk” children and families in its 106 years. Start at NYA’s Las Doradas Children’s Center, 804 Broadway, Venice, CA.
See our Feature Article Here >


It’s Cinco de Mayo so time for even more celebration! There’s a big bash every year over at Baja Cantina from Saturday at 11am – Sunday at 2am with live music! 311 Washington Blvd., Marina del Rey, CA 90292.

First Fridays on Abbot Kinney is this week – it’s FREE & FUN! From 6-10 get there early to find parking or walk or bike there!

Janet’s 1st Friday Pick for February:
GRAND OPENING at: Fiore Designs
This new flower shop is celebrating with a party. You will find fresh floral & garden creations along withexquisite finds & gifts at this new boutique.