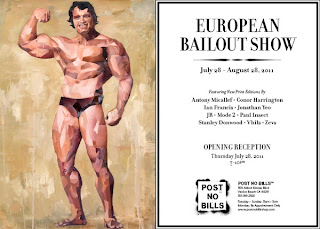 Post No Bills holds it’s second opening at this new print shop and gallery in Venice, called “European Bailout” with a variety of up and coming plus established artists. 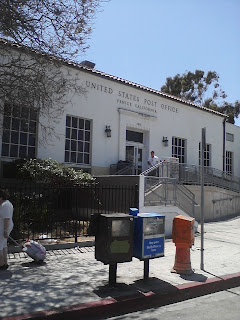 The VNC holds a special meeting tonight at Oakwood Recreation Center, Community Room 767 California (at 7th) at 7 p.m. According to Linda Lucks, President of the VNC,  two items of business only are on the agenda: 1) USPS relocation of retail services (1 Hour); 2) Ocean Front Walk Draft Ordinance (LAMC 42.15) regulating activities on the Boardwalk.(1Hour).

See the previous post below for more information on the Post Office debacle and make sure to participate in this important meeting. At Tuesday’s meeting, Suzanne Zada a trustee for well-known artist Edward Bieberman who painted the mural inside the post office. The historic significance of this mural is far-reaching as it will lead to the path toward historic designation, important in preserving the building.

A motion was drafted on Tuesday with the 30 in attendance that will be presented to the Board tonight. It recommends that the post office building is kept and the annex services moved into it. Next, all local government leaders will be asked to file an appeal to the USPS by the August 5 deadline. Newly elected Congresswoman Janice Hahn will be asked to request a “stay” with the Post Office until she has time to review the matter. We will keep you informed  on the matter.