2 of the Best Kept SECRETS on Abbot Kinney

Even as a local, you can sometimes miss some great spots out on Abbot Kinney Blvd. and I’m here to tell you about 2 spots I was at this weekend that you will want to check out, one that’s new and another that’s not so new… 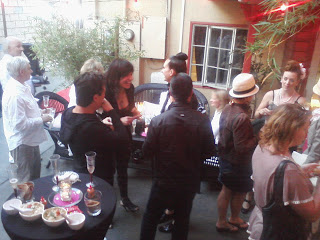 I discovered the first place at the August First Fridays – well, I couldn’t miss it, as I  stopped for a red carpet (and who doesn’t in LA?) and saw a sign suspended in the air  with “The Harlot” in metal letters.. hmmm… what might that be? A new salon, in a little house that has been transformed from an ugly duckling to a magnificent swan. It’s hidden behind e-cookie, a women’s clothing store. This was the grand opening, with Piper Sonoma champagne served to all guests along with catered sushi and other delectables.

I had the chance to catch up with the owner, Marylle Koken, this past weekend to find out more about the salon. It’s been open for 4 months now and Marylle, originally from Holland, already has a following from previous salons she was at and now has a place of her own, one of the most exclusive salons on AKB. It’s located at 1641 Abbot Kinney Blvd., a few doors down from Lemonade, (corner of Venice Blvd.) 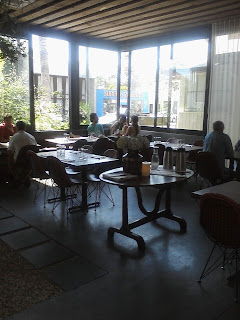 The next thing to do was have lunch and my friend and I  walked a few doors down from the salon and found ourselves in front of The Tasting Kitchen, a spacious, open restaurant with wood and even a small tree growing in the space. It’s so low key that we didn’t know the place has already been open for 2 years; however, it did have a different name and only recently put a sign in front. The service was good and understated – no pretension there. I ordered a chicken salad sandwich which was delicious – it came with a large crock pot of fries, while my friend had the steak and eggs with potatoes. We both enjoyed our lunch there and plan on checking it out again. 1633 Abbot Kinney Blvd.